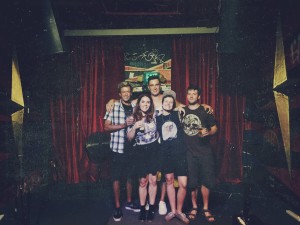 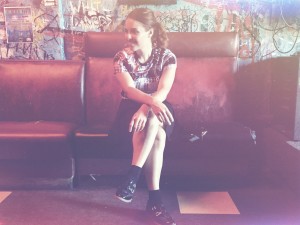 Well, we just got back from our 7 day tour of Washington and to summarize it all – it was freaking incredible.

The music scene is Washington is very supportive, we can’t wait to go back. I’ll be sharing more details about this tour but wanted to first share a story about our first show we did upon arriving.

I had called and booked a show at a little place in Olympia. I was told that the band we were playing with was a local band with a good draw and that we would be either opening or headlining, depending on what we worked out with the band.

Well, we got there and the folk act we were playing with were not local, but were also from out of town and just like us, did not have a big draw.

They were great and super fun, and we all decided to make something out this crazy situation. So, while some of the band members were setting up Nigel (our guitar player) and I went out onto the streets of Olympia, walking up and down the street telling people about a free show happening at the venue. We had people running away from us and looking at us like were were a bunch of lunatics, BUT, as we were playing our set 5-6 people we had talked to out on the street came in and watched the show.

While this may seem like a pointless story, the moral here is that you can honestly make something out of any “crappy” situation that gets thrown at you. We sort of just took it on as a challenge, did everything we could to make it successful and played the show as if there were 1,000 people in the audience.

At the end of the night we made new friends, new fans and actually had a ton of fun.

Side story: I was walking our of the venue around 11 pm to get a cup of tea at the place next door and a very intoxicated, practically naked man started running after a guy driving a beautiful classic car screaming “how dare you take my car, put that back in the garage right now!”. It was a good laugh to end our crazy day.